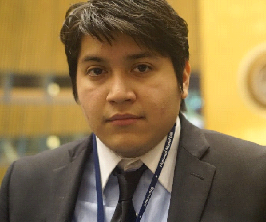 Mr. Nelson Jarrin Mr. Nelson Jarrín holds a BA degree in International Studies with a concentration in Culture and Communication from The City College of New York. He also holds an AAS degree in Computer Operations: Network Administration and Security Options from LaGuardia Community College. He currently works at The City College of New York Division of Government, Community and Cultural Affairs, which is the college's link to political and civic engagement.

Mr. Jarrín has recently worked as a Research Assistant in a NSF-funded environmental research project headed by lead researcher and The City College of New York Professor, James Biles and professors at the Centro de Investigacion Cientifica de Yucatan, on the environmental effects of natural disasters on coastal residents in the state of Yucatan, Mexico. He also has prior connection to the United Nations, as he was an UNEP delegate for the award winning The City College of New York team at the 2015 Model United Nations Conference. He specifically worked on resolutions regarding technology and the environment.

Nelson strives to utilize both his social science degree with his information technology degree knowledge to help bring technology tools such as GIS to underprivileged communities around the world.